Tech billionaire Elon Musk has shared footage of a monkey playing a video game with its mind.

The clip shows the animal, which has been implanted with ‘brain chips’, controlling a paddle in retro tennis game Pong.

In the video, the monkey first learns how to control a basic computer program with a joystick in return for a banana smoothie.

As it plays, the Neuralink chips read and ‘decode’ the monkey’s brain activity, according to the video’s narrator.

When the joystick is disconnected, the chips allow him to carry on playing with his brain.

Neuralink hopes its technology will one day help people with paralysis use mobile phones and computers with their brains.

But it’s still very early-stage, and little of the company’s work has been published in scientific journals.

Neuralink acknowledges the monkey game is a baby step on its website, writing: ‘MindPong is an initial demonstration of the potential capabilities of the N1 Link.

‘However, it’s important to remember that it is a small slice of what our device is intended to achieve.’

How do the ‘brain chips’ work?

Neuralink says the monkey, known as Pager, has had two wireless ‘brain-machine interface’ devices implanted into his skull.

The wireless chips are implanted in an area of the brain linked to arm and hand movement. They map brain activity in an effort to figure out which signals may be linked to different movements.

Neuralink ‘decodes’ this neural activity to predict how the monkey will move next.

‘We can use these predictions to control, in real time, the movements of a computer cursor, or in the video below, a MindPong paddle,’ the Neuralink website states. 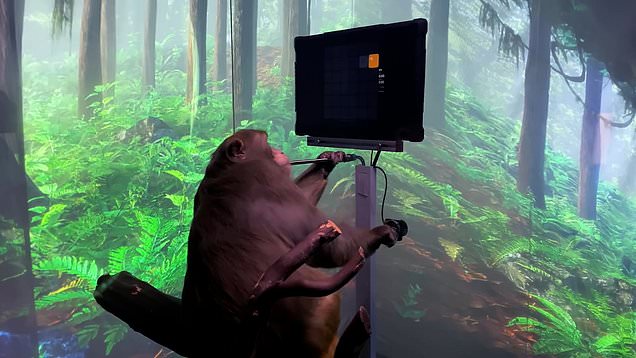 Musk first announced the monkey experiment on the Clubhouse app in February.

He told users: ‘We have a monkey with a wireless implant in their skull who can play video games using his mind.’

Back then, Musk described the device as a ‘Fitbit in your skull with tiny wires.’